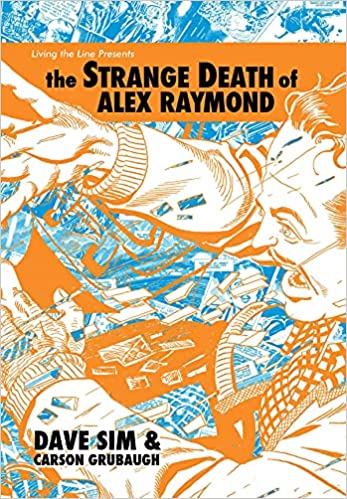 The second I read about The Strange Death of Alex Raymond, I sent for a copy. Dave Sim, famous for the long running Cerebus comics series, was never really on my radar. I know he had some problematic viewpoints back in the day, mostly involving feminism, but I haven’t seen any signs of that in this work yet. Besides I often read works by those who you might say have non-exemplary philosophies. Hamsun and Celine never turned me into a goose-stepping Nazi, just like all those years in catechism couldn’t turn me into a Catholic.  To me the act of reading always comes with the warning, READER BEWARE and BE WARY.
My eyes are getting bad, so I’ve been going through this tome with a magnifying glass. Good lord, it’s wonderful. Really brilliant. I love its errant nature and the “metaphysical” (to use the authors’ term) connections seem fated. The artwork is amazing, both the work of the old realist masters, and, of course, Sim’s mastery of their style. I’m closing in on its end now and am finding it to be a real murder mystery.
Lynn’s dad was a cartoonist during the time period focused on in this graphic investigation. He was in the Cartoonist Society and knew all of these guys mentioned in this book – Foster and Raymond and Caniff. He was even Cartoonist of the Year a couple of times. His specialty was single panel cartoons, which he always drew with a brush (much is made of the use of the brush for drawing lines in this book), and then later in his career he got into doing a strip with his brother, George, (Heathcliff) that is still running today and done by my wife’s cousin (Peter Gallagher).
Years ago, when Lynn and I would visit her folks, after everyone else in the house would be asleep, he and I would stay up late and drink martinis and he’d talk about the cartooning life, and the old cartoonists, and he’d take out books and explain to me what made Raymond and Caniff so fabulous, pointing out their use of black brush work juxtaposed to the white of the page instead of lines and also their lines, techniques, idiosyncrasies etc. It was a real education. Without intention, it raised the art of cartooning in my mind to the same heights as painting and fiction writing. His appreciation wasn’t limited to the realists as this book is, though, he was as excited about the silhouettes in Hagar the Horrible, and the beautiful women Roy Crane drew in Captain Easy with such an economy of line, etc. I loved going through all the books he had and the originals he’d traded with other artists and collected over the years – Walt Kelly’s Pogo and Herriman’s Krazy Kat.
Anyway, The Strange Death of Alex Raymond reminds me of that time. I’ve been excited to read this exegesis on the photorealists and super realists and to follow the wonderfully well-researched and deeply engaging non-linear story, and to wonder at the fabulous art. Intersecting, wild coincidences abound in the story line, and a number of famous folk of the 40’s and 50’s appear as part of it. I have to say, so far, this is one of the most interesting reads for me this year.